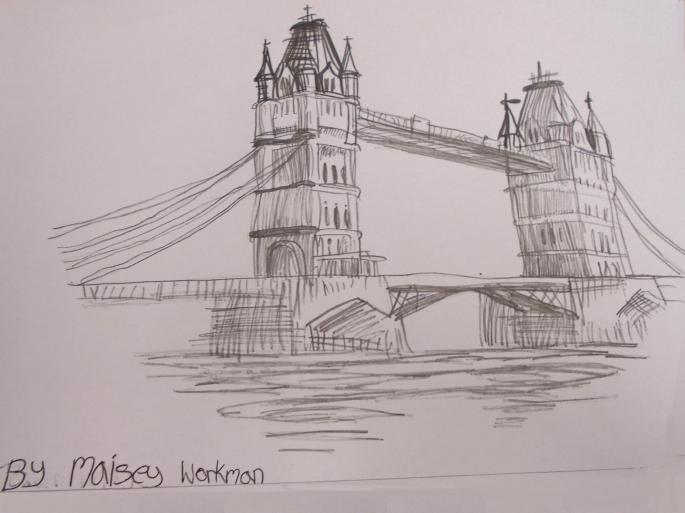 Last year in December, I visited Cam Everland’s Primary School, and after talking about my books, I showed the class how I did my drawings for them. We talked about light and shade and the use of cross lines (hatching) to give perspective.
On Tuesday, the year five teacher, Jacqui Sinclair, sent me a message with two attachments of drawings by one of her pupils, Maisey Workman.
I’m you’ll agree with me that she has done a fantastic job with her drawings.

It was a good day — I finally got to meet Nicola Hill.
Nicola, also an author of children’s books and now an illustrator of books for other aspiring authors, lives in Wotton-under-Edge but did live in Winterbourne. Nicola and I have been messaging for over two years, helping each other with queries during the writing process. Nicola now devotes her time to the her shop, The Collective, and illustrations for other authors.
It was certainly a mixing of minds and good to find out what Nicola actually looked like. And there’s nothing like a real life connection to trump virtual communication any day.
Meanwhile, I’m hard at work writing my series of Scott books and fund raising for various charities. I’m about to send the latest, Ten Elements, to my lovely editor, Nicci Robinson at Global Wordsmiths. And over on Amazon, you can buy Ten Kingdoms (book two)  and Ten Quests (book one) to catch up with Scott and his magical adventures.
Happy Reading and Happy Christmas!

As I visit different schools and scout groups, one question I’m often asked is, “How did you become an author?”

So here it is, the story you don’t need to pay for. I’ve been making up stories for a long time, telling a few to my children and a lot to my grandchildren. Imagine if you will, a giant sag-bag, and an old man (me) laying in the middle, and two young children laying on each side of me.

“Tell us a story, Gramphy” was the usual chorus on this occasion.

“What’s it to be about and where does it happen?” I asked.

And as it was my grandson’s turn to offer me the basic start, he said, “About a boy called Scott and in a spooky house.”

And so the story of Scott and his adventures began.

If you’ve read the first book, you will remember the part in the first chapter where is says, “And then it happened.” Unfortunately for the children, it was at this point that their dad came home, and I said, “Dad’s home. I’ll tell you the next part when I see you next time.”

“What happened to Scott? Was it a monster, was it a ghost? Gramphy, you’re going on holiday for two weeks. You’ll forget.”

“Write it down so you will remember,” said Theo.

As I travelled home, I thought about the story and how they’d clung onto me as I told the initial chapter. By the time I arrived home, I thought that writing an actual story for the children might be a possibility. I packed my notebook and my notes, and on the cruise’s sea days, I wrote the basic story down.

My notes outlined ten problems for Scott to solve, but on reading it through, I felt the first rooms problem needed to be changed. After discarding the first room’s problem, I wrote the upside down world and thought that was quite good. I particularly enjoyed sending Scott out through the cat flap in the upside down house.

Finding that I was enjoying writing the story, I examined the other chapters and rooms. I added a few other little bits to cause my reader to say something like, “That’s disgusting or gross,” and settled down to paging a manuscript up for the children to read. Once I had printed it out, I bound it, created a cover, and passed it to Theo to read. He was very pleased that I’d done this, and I thought that was the end of it.

Theo got into trouble with his mum and dad, because he was caught reading it under the bed clovers with a torch. He read it in three nights! I waited for the manuscript to be returned to me, but then something very unexpected happened.

On the day that I was on grandparent duty collecting the children from school,  Theo came out and said, “My teacher would like a word with you.”

What had he been up to? was my immediate thought.

I was taken into the classroom and met his teacher. She had my manuscript in her hand and after the requisite shaking of hands, said, “Mr Parsons. Theo brought this story into class for ‘Show and tell.’ He outlined the beginning of the story, and all the children were excited to find out more about it.” She went on to say, “Theo placed the book on my desk, and as they did their work, I read some chapters. I’ve got to say to you, Mr Parsons, this book needs to be published. It’s the sort of story that children would like to read. I read about half of it, and I want to know what happens next.”

My reaction was one of shock. I’d written this for the grandchildren, and now an adult had read half of it and admitted to reading and enjoying the story. Theo passed the manuscript to me in a bag before I returned home, and when I got home, I took it out.

Inside the cover was a note from Theo. It read, “This is an amazing book. I loved the story. When is the next one coming out?”

After great thought, I decided to send the manuscript to literary agents and see if I could get interest in it for publishing.

That proved to be soul destroying. I had thirty-seven rejections, and the rest didn’t even bother to contact me to say no. Then a self-publishing house contacted me and asked if they could look at the story. After eighteen months of very slow movement. The first book landed in an envelope through my letter box.

I was a published author.

Not that it was plain sailing from there. Who, apart from my friends and family, would know?

I started doing talks about the route I took to become an author and books started to sell. As children read the book, so they told others, and the books started to sell. I continued to write, and through a friend, was introduced to Nicci, MD of Global Wordsmiths, who took up the challenge to help me produce and publish my second book, Grandad’s Extraordinary Camper Van, and my second book was published.

I was encouraged to draw my illustrations in more detail, and this shows in the production of the camper van story.

This is a nice easy read, a story of a family who just had no idea that an inherited camper van was magic. I’m thinking of a sequel for this, but it’s not quite there yet.

This was followed very quickly by my third book, Those Among Us, a semi sci-fi story for fourteen-year-olds and above, processed by another self publishing company. I was happy with Nicci and her company, so offered her the second Scott book, Ten Kingdoms, and this has just been released, hence this blog to celebrate!

Amazon sold out of Ten Quests books just before Christmas last year, and I had parents calling at my door trying to find a copy. Self-publishing is hard, and to get shops like Waterstones to stock it was hard. They seemed to have one or two but not on show like the more famous authors. One lady text me to say she had found a copy in a shop in London, so her grandchild who had requested it would not be disappointed.

I finished my third book on Scott’s adventures over the 2018 Christmas period, and that’s called Ten Elements. In the new year, I finished writing the sequel to Those Among Us. This is waiting to be proof read, and then I hope to add it to my portfolio of printed books.

Scott keeps playing on my mind, after all, it was my first book, and I did enjoy causing him problems. When I travelled to Iceland, I was made aware about the folklore of Trolls they have in the island.

So a new idea came to me.

Ten Trolls was completed this year, and I started writing an adult book that is now half finished. My grandson, who pushed for the fourth book to come to fruition, said, “As you like ten, and all you stories are Ten something, you need to write ten books about Scott, then stop!”

Number five has now been mapped out, and yes, it’s ten again. This will be Ten discs.

So there, dear readers, you have the story of my writing a book that one day may become a best seller.

At seventy-nine years of age, it had better come soon!